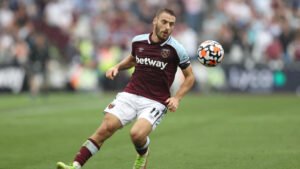 Nikola Vlasic may well be ready to leave West Ham – perhaps on loan – to enhance his chances of playing in next season’s World Cup,

According to his Croatian national team boss Zlatko Dalic that may be the eventual outcome for the player brought into the London Stadium by Moyes for £26 million.

Vlašić has been included in Croatia’s squad for four 2022-23 UEFA Nations League A Group 1 ties to be played in June.

The attacking midfielder is a regular member of  Dalić’s squad, earning 35 caps and scoring seven goals since making his debut as a 19-year-old against Mexico in 2017.

Now 24, Vlašić is a key player for Croatia, having featured in his country’s last 20 senior internationals, appeared four times at UEFA Euro 2020 and helped them qualify for the 2022 FIFA World Cup finals in Qatar.

Vlasic  struggled at Everton in an earlier spell in England but on joining the Hammers  he was an established Croatia international, winner of the Russian Premier League Player of the Year and a midfielder with a fantastic goal scoring record at CSKA Moscow.

But so far it hasn’t happened for him at the Hammers and Dalic said: “He’s ready in case he needs to be loaned out by West Ham

“He came to the club that wanted him (West Ham), asked for him and paid for him. But Moyes’s style of play doesn’t suit him.”

“He inspired me in training. He’s full of energy. He is aware of his situation. I spoke to him, he said he was ready to fight.”

← Report: Irons set to miss out
Moyes reported to have had talks with striker →
Click Here for Comments >