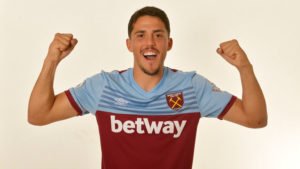 New Hammer Pablo Fornals is playing this evening in the European U21 Championship final in Italy.

The final between Spain U21 and Germany U21 will be live on Sky Sports Football and Sky Sports Main Event from 7 pm.

Fornals has been instrumental in Spain’s run to the final, scoring in the group stage victories against Belgium and Poland, and laying on an assist in their semi-final win against France. Having narrowly lost in their tournament opener against hosts Italy, they have come roaring back with three consecutive victories and just need one more for the crown.

The final kicks off at 7.45pm on Sunday and will be played at Udinese’s Dacia Arena.

Fornals competed a £24m transfer from Villareal to West Ham earlier this month although doesn’t officially become a Hammer until Monday when his contract begins.

Win or lose he will be permitted some time off with his family after International duty meaning he is most likely miss the Hammers trip to Switzerland. He should join the squad to travel to China to Man City and that is the first time we are likely to see him playing in a Hammers shirt.

← Poll: Will you use Socios?
Report: Hammers closing in on £31m midfielder →
Click Here for Comments >