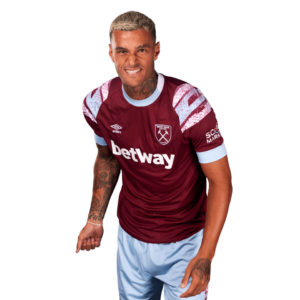 Gianluca Scamacca’s involvement at Arsenal on Boxing Day remains unclear at the moment.

The striker was subbed 10 minutes into the first half of yesterday’s game against Fulham and with Michail Antonio being unavailable any new injury is obviously a worry.

Coach Billie McKinlay said after the game that the 23 year old Italian had rolled his ankle and we have been told today that it has since become swollen.

It is far too early to make any decision on his involvement in Boxing Day evening at this stage.

A London Stadium source revealed: ” It is swollen and it will be a few days before we know the extent of the problem.”

However, no decision on a scan will be taken until that point but on the face of it this seems like a fairly straight forward problem.

Nayef Aguerd does not return until the 23rd and Kurt Zouma is out with injury until mid January.

← Bowen: “Fans say everything about this club”
Areola on cusp of glory →
Click Here for Comments >