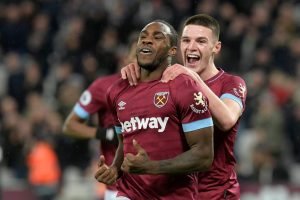 The fabulous professional that is Michail Antonio is back in first team training just as ClaretandHugh told followers he would be earlier in the week.

We understand that the midfielder/striker returned today as he heads for a date with Spurs after the international break.

It really is a remarkable recovery by Antonio who despite having a history of hamstring issues has declared himself – and approved by the medics – ready to join the squad after just ten weeks on the sidelines.

He’s actually back around six weeks earlier than initial predictions  and we understand has been involved in full training with the first team boys.

We were contacted earlier today by a senior source within the club via a text message which simply read: “Delighted to say that Antonio has returned to training with the first team.”

As explained yesterday, Burnley will come too soon for Michail but there is huge confidence that with the international break intervening he’ll be ready for Spurs on the 23rd of the month

← Young Hammers defender on the mend
Poll: Should Olivier Giroud be on West Ham’s radar this January? →
Click Here for Comments >

4 comments on “Welcome back Michail!”