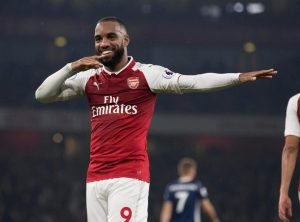 Alexandre Lacazette and Pierre Emerick-Aubameyang  – who formed Arsenal’s front pair against Newcastle last weekend – are unlikely to team up for this afternoon’s game against the Hammers.

The Arsenal boss stated after the game that the partnership, which saw Aubameyang play on the left side of the attack, showed plenty of signs of promise. But since then the Frenchman has dropped a hint that he could leave out today.

His reasoning is that he wants to give a run out to those who will start against Atletico Madrid on Thursday night but London: Football claims it would be “a real surprise” if the Gabon international misses out.

They claim it’s more likely Lacazette will make way to remain  injury free ahead of the Europa League semi-final first leg, with Danny Welbeck and Mesut Ozil starting on either side of Aubameyang in the front three.

Aaron Ramsey was left out against Newcastle because of the nasty cut he received to his shin against Moscow and has been forced to train on his own all week to avoid any contact.

But he should return today providing he has been medically cleared, with Jack Wilshere and Granit Xhaka making up the midfield three to take on the Hammers.

Like Ramsey, both Laurent Koscielny and Hector Bellerin were given the day off last weekend, but both are expected to come back in to the back four with Shkodran Mustafi and Nacho Monreal.

2 comments on “Wenger may spring Lacazette surprise on Irons”