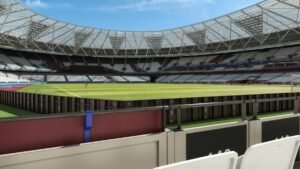 The club says “The new stands will be compatible with rail seating, to allow them to be adapted in future, should there be any changes to Premier League guidelines on safe standing.”

The Hammers launched a new website called  https://www.newstands.whufc.com/  in which they detail the new lower Sir Trevor Brooking and Bobby Moore stands and explain the seat relocation process.

The club has written to season ticket holders affected by the new reconfiguration and they have been given images on new seat views at https://www.newstands.whufc.com/seat-views

Some season ticket holders have already taken to social media to complain about their proposed seat relocations, some have been moved further back while others have been moved behind the goal moved further left or right.  Some supporters claim their family group has been separated with a child 29 seats away from a parent.

The club have launched a set of FAQ’s at  https://www.newstands.whufc.com/faqs explaining that supporters unhappy with their proposed relocation will have priority of another seat in the season ticket renewal window.