Posted by Sean Whetstone on May 5, 2018 in News, Whispers 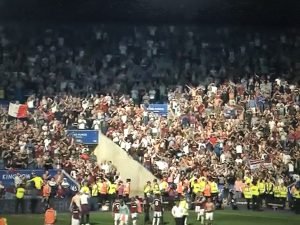 West Ham are mathematically safe from relegation from the Premier League following the Southampton draw against Everton this evening.

Following the Hammers 2-0 win over Leicester City there remained the remotest of possibilities the Irons could still go down as bookies lengthened the odds of a West Ham relegation to 200/1.

Before the Southampton and Everton game the only way that West Ham could go down if the Hammers lose their last two games against Manchester United and Everton – Swansea would need to beat Southampton & Stoke – Southampton would need to lose to Swansea but beat Everton & Man City and Huddersfield would need to get at least 3 points from Chelsea, Man City & Arsenal and close the goal Difference gap from ours by eight.

Southampton failure to hold on to a lead against Everton this evening meant West Ham will definitely play in the Premier League next season.