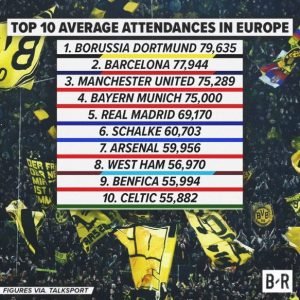 West Ham has the eighth largest average attendance in the whole of Europe this past season and third largest in England figures by Talksport have revealed.

With all games technically ‘sold out’, West Ham achieved an average league attendance (tickets sold) of 56,970 just 30 below their 57,000 London Stadium capacity.

Last week operators London Stadium 185 admitted at the Supporters’ Advisory Board that they have yet to make a formal submission to the Safety Advisory Board to increase capacity to 60,000 but remained supportive should they be asked.

With the first game at the London Stadium not scheduled until September, there is still time for such a request to be made and approved.

2 comments on “West Ham are top eight in Europe”