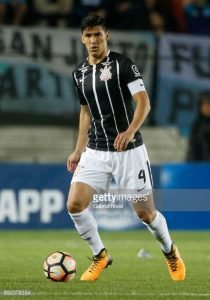 A smiling Anderson arrived at Heathrow airport last night to be greeted by Sky Sports News cameras. He is expected to complete a deal worth around £46m over the weekend and should be announced by the club on Monday as a record signing.

Anderson has already obtained a work permit this week and agreed personal terms said to be worth around £85,000 per week to the 25-year-old who is expected to put pen to paper in a five-year contract to become a Hammer.

Corinthians centre-back Fabian Balbuena is also undergoing a medical today for the Hammers after they paid a £3.5m release fee to the Brazilian club for the 26-year-old.

He could be announced before Felipe Anderson as early as today to become the sixth signing of the summer.

6 comments on “West Ham await the outcome of two medicals”