West Ham board united over Pellegrini

Posted by Sean Whetstone on November 4, 2019 in News, Whispers 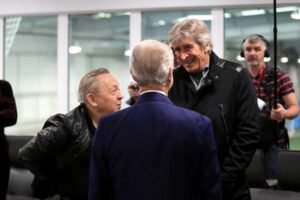 West Ham’s board are backing manager Manuel Pellegrini by providing a united front confident that he and his squad will turn things around this season.

Speaking exclusively to Claret and Hugh via email a senior club insider told us this afternoon: “We need to present a united front, the board believes in the manager, they believe in the squad  and they are confident they will work hard and turn it around.”

While supporters confidence is at an all time low for the  under fire 66-year-old Chilean gaffer after a run of no wins in five games, club insiders insist the board are entirely disinterested in cutting Pellegrini’s contract short with over twenty months left to run.

The board want and are ready to show maximum faith in the manager by honouring his contract and not criticising the recent down turn in form because they fully expect him and the squad to turn things around.

6 comments on “West Ham board united over Pellegrini”