Posted by Sean Whetstone on December 16, 2017 in News, Whispers 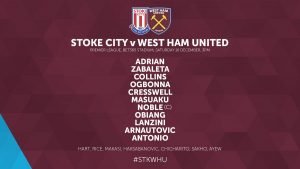 West Ham can leapfrog Stoke, Newcastle, West Brom and Bournemouth this afternoon into 15th place in the Premier League. The Magpies face Arsenal this afternoon while the Baggies face Man Utd and the Cherries face Liverpool on Sunday.

The team has just been announced with just one formed change due to Winston Reid’s one-match suspension after picking up 5 yellow cards.

Stoke have the worst defensive record in the Premier League, conceding 36 goals and only keeping two clean sheets. West Ham have the next worst record, having let in 32 goals.  So should be interesting.

Javier Hernandez has scored five Premier League goals against Stoke. He has only fared better against Wigan, with six goals.

Mark Noble will become the first player to make 300 Premier League appearances for West Ham. He made his Premier League debut in a 3-1 home victory against Mark Hughes’ Blackburn Rovers in August 2005.