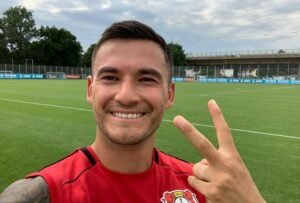 West Ham could re-ignite interest in Bayer Leverkusen midfielder Charles Aranguiz, who is out contract next summer.

The claim was made by EXWHUEmployee on his West Ham Way Phoenix FM radio show on Wednesday evening.

Manuel Pellegrini has previously admitted he tried to sign the Chilean midfielder but the player turned him down.

The manager previously told  El Mercurio in the summer “I will not talk about conversations, but I can tell you that I would have loved to have many Chilean players who have been figures worldwide. In the past I took several: Salas, Rojas, Matías Fernández, Iturra, Moras; I have taken seven or eight Chilean players. I tried to take Aránguiz to West Ham, but he did not want to.”

The 30-year-old has played 12 games this season for Bayer Leverkusen and has racked up over 100 appearances for the German side since his 2015 move to Europe for £11.7m.

Aranguiz has made 75 appearances for Chile since 2009 scoring 7 goals and remains a regular for his home country.

One comment on “West Ham could return for Chilean midfielder”