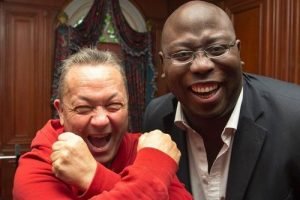 A report in the Daily Mirror said that the West Ham owners have requested urgent talks with the London Mayor Sadiq Khan.

Darren Lewis writes in the Mirror “David Sullivan and David Gold are instead demanding urgent talks with London Mayor Sadiq Khan over the public order crisis on Saturday afternoon. The Irons claim Khan has ducked meetings with them despite requests. They now believe he must – as a priority – address the appalling scenes, the lack of planning and the lack of action from the London Stadium operators he appointed.

West Ham are also demanding a large police presence for their remaining games. Their next game is at home to Southampton on March 31.”

Last December “Sadiq has also announced he is now taking over control of the London Stadium to put it on a more secure financial footing and – through the London Legacy Development Corporation – is putting together a plan to ensure its long-term future as a world-class multi-purpose venue and to continue providing community benefits.”