West Ham do the double over Spurs in a week

Posted by Sean Whetstone on March 9, 2016 in News, Whispers 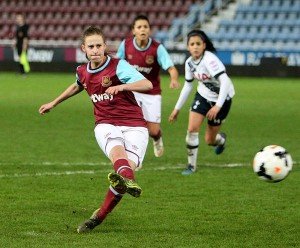 West Ham ladies Captain Katie Bottom scored the only goal of the game from the penalty spot in front of the crowd of 1,741 at the Boleyn Ground.

Watch her spot kick winner below!