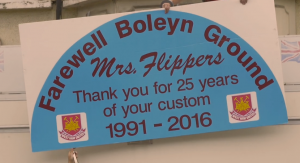 Away From Home – Leaving Upton Park – A Feature Length Documentary will be released on 30th March by East 15 films.

On May 10th 2016, after 112 years of calling The Boleyn Ground home, West Ham United played their final match in the iconic stadium before moving across the East End to the London Stadium.

Filmed over the last season at the Boleyn Ground and the first two seasons at The London Stadium, Away From Home puts the West Ham fans at the forefront of this monumental move.

The rollercoaster of emotions they have experienced during the last few seasons, their hopes and fears for the future and ultimately what West Ham United means to them through memories, rituals and relationships as well as community, identity and class connotations and a sense of belonging.

In the aftermath of the move, Away From Home returns to Upton Park to illustrate the devastating impact on local businesses that relied heavily on the match day revenue and also explores the proposed legacy of what once was West Ham’s home.

Away From Home – Leaving Upton Park – A Feature Length Documentary
What do the West Ham fans and Upton Park businesses think?
Has the move achieved its promised goals?
A Supporters Story – Trailer available to watch now#AwayFromHome #WHUFC #COYI pic.twitter.com/CjzsWqjffc