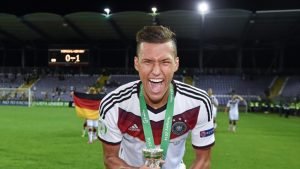 West Ham have enquired about RB Leipzig striker Davie Selke, according to German Magizine Kicker. The report claims that the player’s agent Akeem Adewunmi is said to be in the UK this week to try in an attempt to seal a deal to the Premier League.

The German magazine says that Swansea City are the likeliest destination but both Everton and West Ham have scouted the German Under 21 International too.

Selke has found his options limited this season starting just two times against FC Cologne and Borussia Dortmund, but he was a substitute on 19 times. 22-year-old old has scored four goals in the Bundesliga this season including two just two minutes in the 4-1 win over Hertha Berlin.

Selke has an Ethiopian father and German mother. The Ethiopian Football Federation had hoped both would represent them. Perhaps unsurprisingly they turned down their approaches, opting to continue his journey through the German ranks.