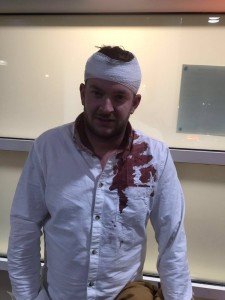 James Tomkins was not the only person to leave Liverpool with a sore head over the weekend, West Ham fan, Shaun Manning was one of the 3,000 strong away army supporting his team at Anfield but he left the city with a bandaged head.

Shaun explained he was in the city centre after the match when someone started hitting him with a brick several times in an unprovoked attack.

Shaun told Claret Hugh’s associate editor “We was in the town centre and some guy was started on every one that walked past him so we told him to shut up and go away,  he then carried on spat at my mate and punched him and then run of up the road come back down with a brick and went for me. He hit me five times in the head as we was kinda fighting and went to the floor then got split up and then come back down with a pole and assaulted me again I got stitches and glue in my head were there was like five big cuts”

Shaun had earlier told his twitter followers that the police arrested his attacker but he doesn’t believe the attack was football related saying: “The police got him and arrested him that night. It wasn’t football violence! I got on with the fans in the fans in the pub”
Permalink

One comment on “West Ham fan attacked in Liverpool”