West Ham fans are the best in the UK

Posted by Sean Whetstone on March 10, 2016 in News, Whispers 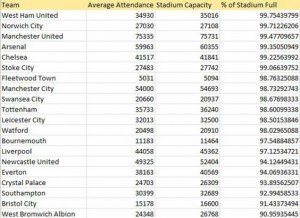 West Ham fans can claim to be the best in the UK after research revealed that their stadium has been 99.75 per cent full on average this season.

With a league average of grounds being 95.86 per cent full, Premier League stadiums are also more full than Europe’s other major three leagues, the Bundesliga, La Liga and Serie A, Germany is the only other nation with an average of more than 90 per cent.

Research by MyVoucherCodes shows that the Boleyn ground is the fullest ground of all 92 in the football league, narrowly beating Norwich City’s Carrow Road (99.71 per cent) and Old Trafford, the home of Manchester United (99.47 per cent). Arsenal, Chelsea and Stoke City are the only other three Premier League clubs to beat 99 per cent attendance.