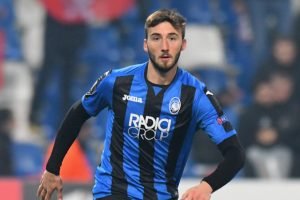 Atalanta has reportedly slapped a£22million price tag on West Ham target Bryan Cristante even though The Italian club can land Cristante from Benfica for £4.5m at the end of their current loan from Benfica.

Atalanta are now set to take up their option to sign the 22-year-old permanently, before instantly selling him on for profit to the highest bidder. West Ham are claimed to be one of those chasing the Italian, while he has more recently been linked with Manchester United, Chelsea, Juventus and Inter Milan.

He previously played on loan at Palermo and Pescara but it’s at current side Atalanta that he’s made the biggest impact.
Having signed for Benfica three years ago, Cristante is spending the current season on loan at Atalanta and has enjoyed a fine run, scoring eight goals in 22 games – including a brace in the Europa League against Everton.

Speaking to La Gazzetta dello Sport, Cristante said: ‘So many people tell me: “The Premier League is the perfect place for you,” and I agree with them. ‘It’s physical, there’s a lot of tackling and open football. I can really see myself there.’

Claret & Hugh’s team of creators work with passion and pride to bring you the quality of content that keeps you coming back for more. Support for our creators, however big or small, will help us keep your sports content fresh, frequent and loyal to the club. £5 £10 £20 £50
Permalink