West Ham have just one option at Burnley 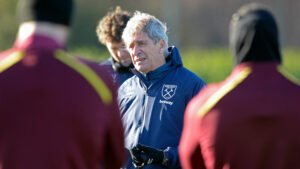 West Ham boss Manuel Pellegrini has only one option as he takes his squad to Burnley this afternoon and that is to attack because we simply aren’t a very good team playing any other way.

We want to see them quick off the mark, carrying the ball into the opposition half from the start,not offering easy possession to the opposition as has been too often the case this season and the  slow starting nonsense simply has to end.

Burnley don’t take prisoners – they are hard and physical,  so this should be a game made for Robert Snodgrass who possesses the same qualities.

He ihas been star man over the last two games – bad though the general performances were. So two goals and an assist is top value from a guy of whom we expect a lot today.

I’m convinced Pellegrini has – from all reports – got into the squad this week and, just as was the case against Sheffield United, I expect there to be a definite reaction.

But whilst this is a game for the likes of Snoddy, Felipe Anderson has to prove that he’s really up for a fight and I expect Lanzini to get the call rather than Yarmo as we look for the Argentinian to come back to his creative best.

At the back Fredericks MUST return along, I hope with Ogbonna, given the threat of Chris Wood and the crosses Burnley love to pile in.

And given we are a poor team when sitting on the back foot I hope Masuaku retrns to offer additional pace and trickery down the left side.

7 comments on “West Ham have just one option at Burnley”