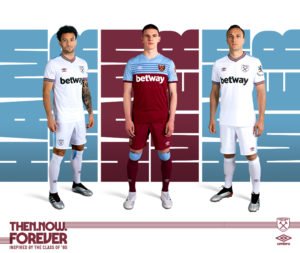 A Claret and Hugh poll of over 1,320 readers gave their verdict.

Over 68% said they liked both the new home and away kits.

24% like the new away kit but not so keen on the new home kit.

Nearly 4% like the new home kit but not the new away kit.

Just over 3% don’t like either of the new kits.

Inspired by the Hammers’ 1980 FA Cup-winning team, the strips are a modern twist on the iconic colours worn by Billy Bonds, Trevor Brooking and co on the road to Wembley, climaxing in an unforgettable win over Arsenal, 40 years ago. With a retro feel, but designed to appeal to all generations, the home shirt features a claret V-neck and sky blue chest, including a tonal stripe design, sky blue sleeves and claret cuffs and the Umbro diamond motif design on each shoulder.

The West Ham United crest is in full colour with an embroidered frame, while the FA Cup winners are honoured further with a 1980 crest graphic on the back of the neck.  The home kit is completed by claret shorts featuring a full-colour crest and claret shorts.