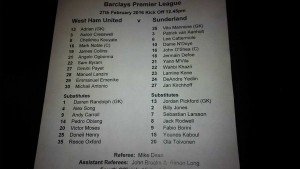 West Ham have only lost one of their last seven games against Sunderland, although four have been drawn (W2, D4).

The Hammers have won seven and lost just one of the last 10 Premier League home games against the Black Cats.underland’s last win away to West Ham was

Sunderland’s last win away to West Ham was in 2011!

The Hammers are unbeaten in their last 12 home games in all competitions (W7, D5).

Dimitri Payet has scored or set up 12 Premier League goals this season – twice as many as any other West Ham player.

Come on you irons!

Ladies and Gentlemen, I give you Mr Dimitri Payet. https://t.co/JAibD40FF9