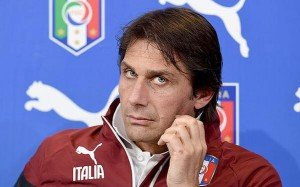 Jason Burt writing in yesterday’s Telegraph has suggested West Ham have been in contact with representatives of current national Italian manager Antonio Conte but he wants to remain in post for the Euro 2016 tournament.

Burt claims “Intriguingly there is also understood to have been some contact from West Ham with Antonio Conte, the former Juventus coach, but he intends to remain as the coach of Italy until the conclusion of Euro 2016.”

A few months ago Burt suggested Conte was considering quitting Italy after receiving death threats via social media from Juventus fans. Conte won three consecutive Serie A titles with Juve before succeeding Cesare Prandelli as Italy coach after the World Cup failure. Prandelli was also linked to West Ham earlier this week although the Hammers are thought to have rejected a move from his representatives.

4 comments on “West Ham linked with another Italian boss”