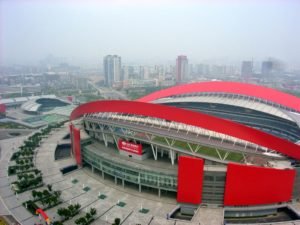 West Ham will be broadcast live in the UK by Sky Sports Football and Sky Sports Main Event, with coverage starting at 1.15pm  UK time and kick-off at 1.30pm.  The Hammers will tackle Premier League title holders Manchester City in the semi-finals at Nanjing Olympic Sports Centre Stadium today, following the tournament opener between Newcastle United and Wolverhampton Wanderers.

The losers and winners will then square off in a third/fourth-place play-off and final at Hongkou Stadium in Shanghai on Sunday.

Manuel Pellegrini has a fully-fit 23-man squad to pick from for Wednesday’s game in Nanjing, with Lukasz Fabianski set to make his first appearance of the preseason.

New signing Pablo Fornals, Fabian Balbuena and Arthur Masuaku miss out as they are still on a post-international duty break.

Manchester City arrived late in China on Tuesday lunchtime after a series of administrative errors meant their chartered plan was unable to take off on Saturday and Sunday.

Outside of the UK

Canada   All the games will be aired on DAZN in Canada.

Australia   For all the Australians eager to watch the Premier League Asia Trophy, they need to simply tune on to Optus Sport to catch the games live.

China  For those in mainland China that can’t make it to the Nanjing Olympic Sports Center and Hongkou Football Stadium to watch the players live from the stands, PPTV Sport China will broadcast the games for them.

One comment on “West Ham live on TV this lunchtime”