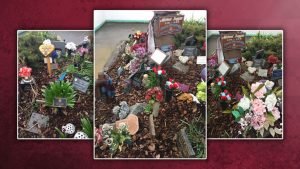 West Ham have made an official statement to confirm they have implemented a programme of weekly maintenance to ensure our supporters’ Memorial Garden adjacent to the site of the Boleyn Ground remains respectfully maintained.

The statement on WHUFC.com says ” The Club has taken the decision to step up its fortnightly maintenance support to developer Barratt London, further to incidents of littering on the site, and will now monitor and ensure upkeep on a weekly basis.

Hammers fans visit the Memorial Garden on Green Street regularly to pay respects to loved ones, whose ashes have been scattered or buried beneath our former home. The photographs above were taken over the Easter weekend.

The Memorial Garden is open Monday to Friday, between 8am and 3pm.“

Developer Barratt London had originally agreed to carry out a weekly clean up and daily checks at the memorial garden but the area has frequently been photographed in a poor state over the last two years. West Ham groundsman were often drafted to help clean up but the garden upkeep by the developer was not sustained.