Posted by Sean Whetstone on July 1, 2014 in Whispers 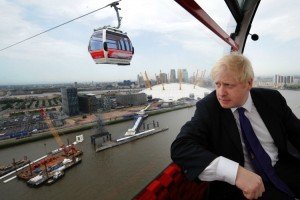 Part of the London Olympics 2012 infrastructure was a cable car system which travels between the Royal Victoria docks and the North Greenwich Peninsula close to the O2 arena.

And during a radio phone-in show this morning (Tues) on LBC London, Mayor Boris Johnson has pledged to look into the much-discussed cable car project.

Responding to a caller who said ‘the cable car went nowhere,’  he explained a study would look at the possibility of  extending  the route to London City airport in one direction and the Olympic Park in the other.

The project has been criticised as a costly white elephant but extending the route could give the project a new lease of life with the possibility of the West Ham match day experience becoming something a bit special for some.