Posted by Dave Langton on February 13, 2018 in News, Whispers

West Ham have been forced to pay out just under £10m to their crocked stars in the first half of the season. 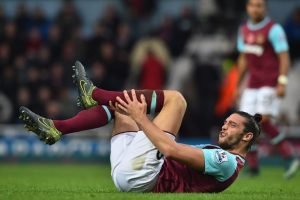 New research from insurance broker JLT Speciality has found that the Irons have been the hardest hit of any club by injuries, suffering 41 injuries across the team!

Only Manchester United, Arsenal, Liverpool and Everton have had to pay out more than the Hammers to crocked players.

Throughout 2017-18 West Ham have had injured players unavailable for a staggering 993 days.

The likes of Manuel Lanzini, Marko Arnautovic, Andy Carroll and Winston Reid have all been out for periods this season and David Moyes is sure to be thanking his lucky stars that the likes of Lanzini, Arnie and Michail Antonio are getting back to full fitness.

3 comments on “West Ham pay out £10m to injured stars”