The Mexico international is wanted by Sevilla, with the Liga club looking to add some firepower to their forward line. 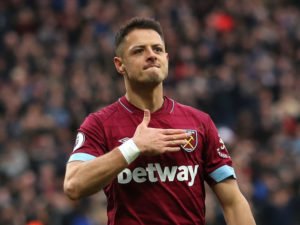 West Ham, the report states, want to receive €8m (£7.2m) before they will sanction a sale.

Chicharito is said to have asked the Irons to consider the bid but, obviously, the injury sustained by Michail Antonio against Newport County has muddied the waters.

Sevilla have thus far made two bids, though neither have reached the required value for West Ham to cash in.

Hernandez has already made two appearances in the Premier League this season, scoring in the 1-1 draw with Brighton.

Yes, we may have signed both Sebastian Haller and Albian Ajeti this summer but, with Antonio injured, it feels as though we would be playing with fire if Hernandez was sold.

It is fair enough that he wants to pursue the move – Sevilla are a big club – but to sanction the sale outside of the British transfer window is risky.

It means there is next to no hope of bringing in a replacement unless a free agent can be found.

It makes more sense for Hernandez to be told that he can potentially go in January, provided a replacement is signed first, and the interest remains strong.

Otherwise, the Irons risk leaving themselves short in a vitally important area just as the season gets underway, particularly if either Haller, Ajeti or both pick up injuries.