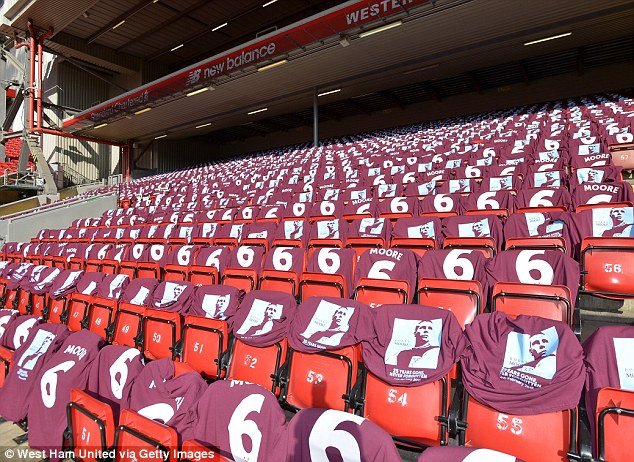 West Ham fans paid tribute to club legend Bobby Moore at Anfield this afternoon by donning tee-shirts in his memory.

In the away end, thousands of printed shirts were placed on the seats and many fans were quick to pull on the Moore tribute piece.

Close to 3,000 West Ham fans made the journey from London to Liverpool and made quite an impression as they created a pocket of the stadium claret and blue. Moore died on 24th February 1993 aged 51 after a battle with cancer. 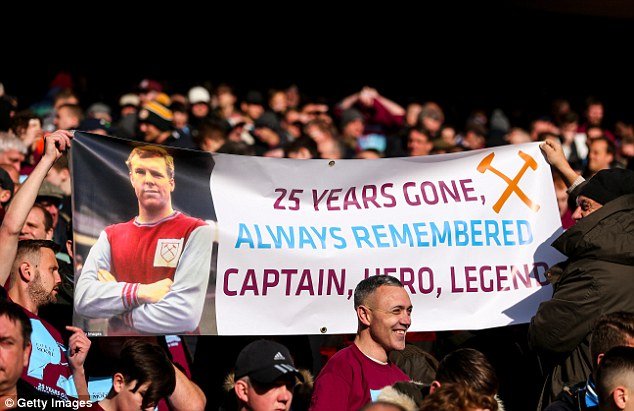 West Ham also opened a Bobby Moore exhibition in the club store next to the London Stadium today in honour of their most famous son.

They also plan a number of events at West Ham’s Premier League game against Burnley which is the closest home game to the anniversary of his untimely death.  Some supporters have claimed this is cynically being done to counteract the planned protest march on the same day but they announced a season of events to honour Mooro last September on WHUFC.com and again in the Official programme before the march was planned. On this occasion, no conspiracy theories are required. In this regard, the club is doing the right thing to honour Moore and his family as they did five years ago at the Boleyn Ground for the 20th Anniversary of his death.

The season celebrations started with the opener against Huddersfield as this article from September confirms.