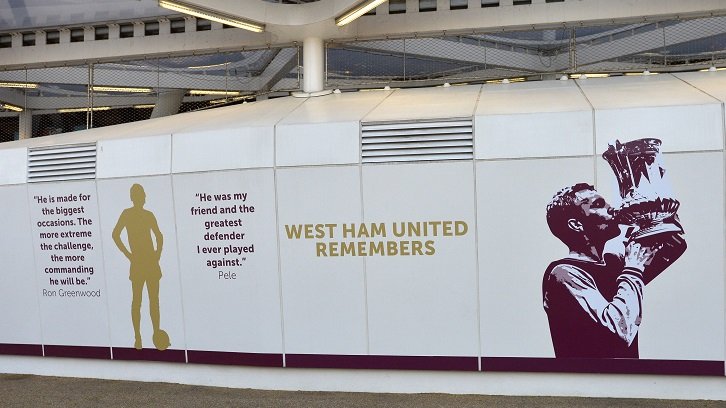 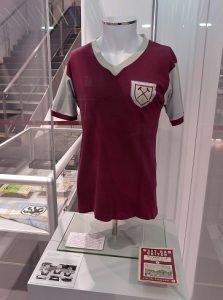 To mark the 25th anniversary of Bobby’s tragic passing, West Ham have announced a number of tributes and events to ensure that the memory of  Mooro is honoured.

A giant commemorative mural design has been added to the outer wall of London Stadium on podium level, located between turnstiles G and H. The artwork, depicting images of Bobby alongside quotes from legendary Hammers boss Ron Greenwood and the great Pele, will remain in place for the remainder of the 2017/18 season, accompanied by the commemorative anniversary design currently in place on the mid-tier of the West stand in the stadium arena.

Further to this, we are launching a Bobby Moore memorabilia exhibition on the lower ground floor of the Stadium Store – admission to which is free of charge – giving Hammers fans of all ages the opportunity to gain a close look at some of most prominent and prestigious artefacts and honours from his life and career.

Among them are the actual shirt he wore on his West Ham United debut against Manchester United on 8 September 1958, his 1964 FA Cup and 1965 European Cup Winners’ Cup winning medals, his 1964 Footballer of 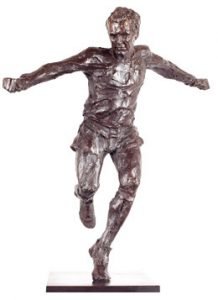 the Year award and his 1966 FIFA World Cup finals cap, along with a replica of his World Cup winner’s medal, a matchday programme and a match ticket personally signed by all eleven England players on that famous July day at Wembley.

From Saturday, Hammers fans of all ages can enjoy the free display, which also includes a stunning three-foot high bronze statue of Bobby, seen in public for the first time after being commissioned by his daughter Roberta as part of a series of six sculptures to mark the 25th anniversary.

Later in the day, the 3,000 travelling Hammers fans making the trip up to Anfield for our Premier League fixture with Liverpool will be given specially-commissioned commemorative t-shirts to wear throughout the game, to play their part in creating a special and unique tribute to Bobby.

The programme of memorial events culminates on Saturday 10 March, when our Premier League home fixture against Burnley – our first home game after the anniversary – will be dedicated to Bobby’s memory, with members of the 1964 and 1965 Cup-winning teams and Bobby’s family joining us at London Stadium to mark the occasion.