Posted by Sean Whetstone on September 25, 2018 in News, Whispers 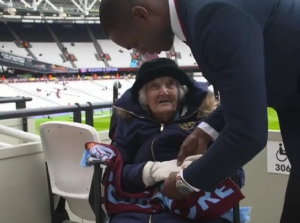 West Ham United’s oldest Season Ticket Holder Mabel Arnold has been given a free Club London hospitality space by the club in recognition of her life long support.

The 102-year-old lifelong fan was given the surprise present at London Stadium before the match with Chelsea on Sunday.

The club said on WHUFC.com “As a gesture of thanks for her magnificent support over many years and in recognition of her unique status, we have upgraded Mabel to a complimentary, permanent Season Ticket in our Club London hospitality area, so she can watch matches from the comfort of her wheelchair, accompanied by her son Graham and have access to the comfort and warmth of a hospitality lounge before and after the game.Former Hammers striker Marlon Harewood escorted Mabel to her new seat, with the best wishes of everyone at West Ham United.”

1️⃣0️⃣2️⃣ years old and still coming to watch the Hammers 🙌
We had a surprise yesterday for our oldest season ticket holder ❤️
Thank you for your support, Mabel Arnold! 👏 pic.twitter.com/Ms3Tv2ETc9