Posted by Sean Whetstone on September 29, 2019 in News, Whispers 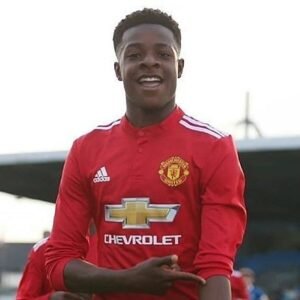 According to a report in the Sunday People West Ham are in pole position to sign former Manchester United academy striker Mipo Odubeko.

Odubeko maybe just 17 years of age but he was regarded as one of the best strikers in their academy, having netted 35 goals last season. The Republic of Ireland Under-17 international has rejected the chance to sign a new contract with the Red Devils deciding he had a better chance of breaking through to a first-team elsewhere.

His contract with Manchester United expired at the end of June making him a free agent although any club signing would need to pay compensation which could be set by a tribunal unless the two clubs can agree on a figure between them.

Several overseas clubs were said to be interested in signing Odubeko including Juventus, Borussia Dortmund, Feyenoord, Bayern Munich, Genoa, Newcastle and Burnley but if the report is to be believed he wants to join Manuel Pellegrini’s project at West Ham.
Permalink