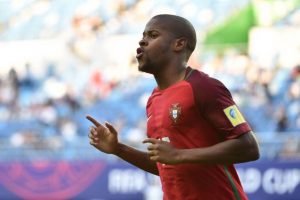 West Ham are to sign Portugal starlet Xande Silva in a deal worth up to £3.1million according to reports in Portugal.

The attacking midfielder, currently represents Vitoria in his homeland, having joined from Sporting’s academy in 2014.

The 21-year-old has made 30 appearances in all for Vitoria’s first-team, scoring once, while he’s also been capped at every youth level by Portugal from Under-15 to Under-20.

The report says that the two club’s have already ‘reached an agreement’ for the transfer of the youngster, with an initial payment of around £1.3million (€1.5m), plus a potential increase of £1.8million (€2m) should certain bonuses be triggered. Vitoria also have a 10 per cent sell-on clause written in the deal.

Silva is set to join West Ham’s Under-23 squad when his move from Vitoria is confirmed.