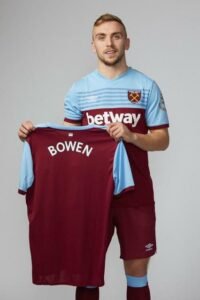 Over 400 Claret and Hugh readers have been submitting their chosen West Ham starting XI lineup.

With almost a full squad to chose from the readers have voted:

Fabianksi gets the nod in goal with 391 votes.

Aaron Cresswell as left-back with 390 votes, Angelo Ogbonna with 397 votes and Issa Diop with 396 forms the central defence with Jeremy Ngakia with 380 votes at right back.

Declan Rice fulfils his defensive midfield role on 395  but with Tomas Soucek out Mark Noble did not get enough votes to make the cut with 235 votes.

In midfield, Michail Antonio gets the vote with 343 with new boy Jarrod Bowen on 352 votes while Robert Snodgrass gets 252 votes to keep his place.

Pablo Fornals gets the nod on 358 votes while Felipe Anderson just creeps through with 248 votes while Manuel Lanzini with 18 votes does not make the cut likewise Sebastien Haller with an unconvincing 108 votes.