Posted by Sean Whetstone on January 3, 2016 in News, Whispers 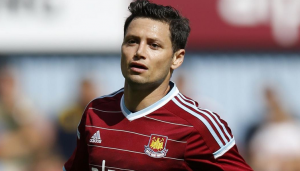 West Ham Striker, Mauro Zarate has been targeted by Spanish club Malaga according to a Spanish radio station repeated in the Daily Mirror.

Zarate joined West Ham from Velez Sarsfield in 2014 on a free transfer after buying himself out of his contract. He has scored five league goals during twenty appearances and spent part of last season on loan at QPR.

According to Spanish radio station Cadena Ser de Malaga, Malaga want to bring him to La Liga. The 28-year-old’s older brother Ariel had a four-year stint at Malaga between 1998 and 2002.

It is thought that Zarate would be open to a move as he is further down the striker pecking order with the return of Andy Carroll and Enner Valencia from injury, but in order for that to happen he would first have to reach an agreement with West Ham over rescinding his current contract, which expires in 2017.

The striker previously agreed to pay a substantial amount towards a new gym which was being built in his home country to help the development of the game to  enable him to buy himself out of his contract with Velez Sarsfield.