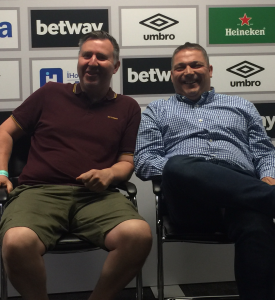 The meeting included nineteen season ticket holders including Claret and Hugh Associate Editor, Sean Whetstone who was there as a representative of the West Stand lower and friend of the site Nigel Kahn who was there representing WHUISA.

During the two-hour meeting, a range of subjects were discussed including; accessibility and the successful launch of the Disabled Supporters Advisory Board, stewarding and matchday operations, stadium security, ticketing, routes to and from London Stadium and public transport links.

The full minutes of the meeting can be found at http://www.whufc.com/sites/default/files/inline-files/SAB%20minutes%20240517_0.pdf

The full minutes of the April DSAB meeting can be found at http://www.whufc.com/sites/default/files/inline-files/DSAB%20minutes%20190417.pdf