West Ham supporters bemused at team of the week pick 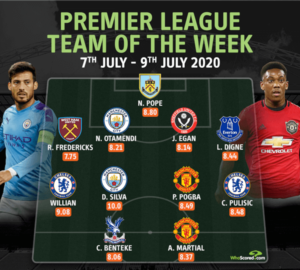 West Ham supporters are bemused about one  Hammer being chosen in the Who’s Scored Team of the week.

Ryan Fredericks scored 7.75 in WhosScored.com Premier League team of the week for his performance against Burnley at the London Stadium.

Claret and Hugh’s own West Ham player ratings gave the right-back just an average score of 4.24 from 275 separate submissions from readers.

Ryan Fredericks joined West Ham on a free transfer in 2018 from Fulham on a four-year deal but has failed to convince all supporters he is the number one right-back for the Hammers.

With the loss of right-backs Pablo Zabaleta and Jeremy Ngakia last month after their contracts expired it is hoped West Ham will re-enforce this position over the summer transfer window.

Ben Johnson is waiting in the wings for his chance but manager David Moyes is reluctant to utilise after being out for such a long time after a bad injury.