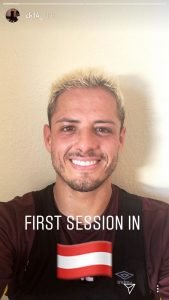 Tonight’s game came too soon for Chicharito who just returned from his holidays after his World Cup duty in Russia but he has made the trip to Austria with the squad and has been involved in training with the first team posting ‘First session In’ on social media today.

Edi Fernandes is injured and didn’t make the trip to Austria as is the same for Aaron Cresswell who is still not 100% after his groin problem.

Felipe Anderson, Andriy Yarmolenko and Cheik Kouyate have being rested this evening to play in Friday’s game against Angers in three days time.

West Ham’s Under 23 squad face Billericay Town with a delayed kick-off of 8pm due to traffic on the M25.

Reece Oxford has been made captain for the U23’s with Nathan Holland also playing tonight.  No sign of Sam Byram or Jordon Hugill, Make of that what you will.