West Ham to bring back museum 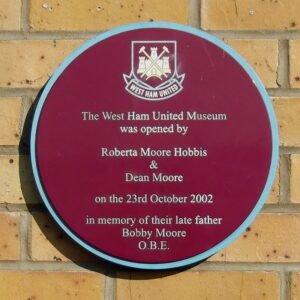 West Ham are looking to bring back a West Ham museum within the London Stadium members of the West Ham United Official Supporters’ Board (WHU-OSB) were told tonight by Vice-Chairman Karren Brady.

The Hammers former museum located at the Boleyn Ground was opened in 2002 by former Chairman Terry Brown but was closed during Eggert Magnusson & Bjorgolfur Gudmundsson’s tenure because it was deemed to be a waste of space and money as the number of visitors had dramatically fallen.

When West Ham bid to own the former Olympic Stadium during the first tender progress their proposal included an Olympic visitor centre and a football museum at the stadium. Those plans were abandoned when the first tender process was cancelled due to a complaint to the European Commission.

Caterers Delaware North now has the contract for Stadium tours in partnership with the West Ham and the pair are working together to display and include the club’s memorabilia and heritage as part of the stadium tour.  The club say they have in excess of £2m of Hammers memorabilia and history in storage and safe deposit boxes.

The club will also continue to stage mini-exhibitions in the club store.