West Ham to fight to keep hold of Hammer 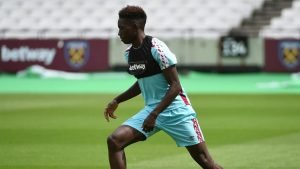 West Ham have not given up hope in getting Domingos Quina to sign a new contract to stay at West Ham. He has only a year remaining on the contract he signed with West Ham in May 2016 which could see him leave on a free transfer with only a small compensation to the Hammers set by an independent tribunal.

Quina has so far made six senior appearances for the Hammers, all of them coming in cup competitions since his debut in the Europa League in November 2016.

Barcelona is claimed to hold some interest for Quina for their B team with a figure of £600,000 touted while two Bundesliga clubs – Hoffenheim and Werder Bremen are understood to be interested in Quina, who came through the youth ranks at Chelsea.  Leeds have also been linked with the teenager.

His agent is Aidy Ward who is known to be a tough negotiator who will the best for his client both in terms of finances and his chances to make the step to the first team like Declan Rice did last season.