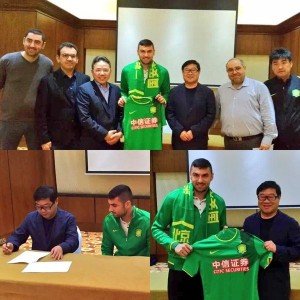 Former West Ham transfer, Burak Yilmaz linked with the Hammers in the January transfer window has become the latest footballer to move to China.

The experienced Galatasaray striker officially completed his move to Beijing Guoan today, following a four-year stay with the Turkish team.

Galatasaray previously claimed that West Ham offered €5m (£3.8m) for the player, only to be turned down when it emerged that he did not want to leave. Slaven Bilic, meanwhile, made it perfectly clear that he was only willing to commit to a loan deal for Yilmaz. Bilic told reporters “With Burak, it’s a different situation because they are looking to sell him. If they are going to let him go, they are looking to sell. And as I said, we are not buying now.”

The Shanghai Daily says the deal is believed to be worth in the region of €8m. The 31-year-old is thought to have signed a three-year contract at the Workers’ Stadium.