West Ham United will face no action from the Premier League for their decision to show a big screen replay of the controversial incident involving Andy Carroll and Liverpool keeper Simon Mingolet. 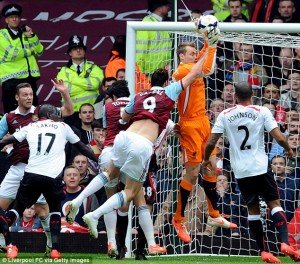 The two clashed for the goal eventually given by referee Andy Taylor at Upton Park and reports immediately emerged the decision was a breach of league regulations.

Taylor allowed the goal after a long discussion with his assistant Stuart Burt who had flagged for an infringement on the keeper.

The replay appeared to show that the Hammers centre forward had shoved the stopper in the face which may have contributed to him dropping the ball which defender Guy Demel stabbed home.

It was at this point that pictures showed Carroll’s foul on Mignolet, prompting Liverpool’s players to urge the officials to consider the footage.

The replay was soon cut short by the screen operator, who takes a feed of Sky Sports coverage but is able to override re-runs of controversial incidents.

However, Claret and Hugh has learned exclusively that the league will be taking no action against the Hammers under their rules.

A source told us that they were satisfied the club had done nothing to warrant any action.