Irons face Rovers away if they win replay

Posted by Sean Whetstone on January 31, 2016 in News, Whispers 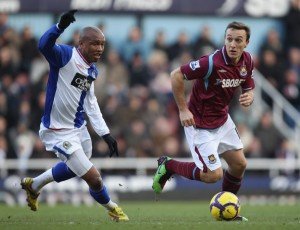 West Ham has drawn Blackburn Rovers away in the fifth round of the FA Cup assuming they overcome Liverpool in the fourth round replay on 9th February at 7.45pm under the Boleyn Ground lights.

Games in the fifth round will take place across the weekend of 19th-22nd February and winning clubs will receive £180,000 from the FA Cup prize fund.

Our last game against Blackburn Rovers came in 2011 in the Premier League which ended 1-1 when Der Hammer, Thomas Hitzlsperger scored the only West Ham goal.

Our last five games against each have ended in a draw with the last win coming in 2008 when we were the 4-1 victors. Calum Davenport, Carlton Cole and Craig Bellamy scored that day together with a rovers own goal.

Our last FA Cup draw was in 2006 in the fourth round proper when we won 4-2, goals from Teddy Sheringham, Matty Etherington, Bobby Zamora and another Rover own goal.

4 comments on “Irons face Rovers away if they win replay”