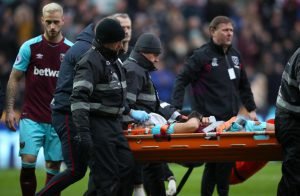 Centre back Winston Reid suffered a serious injury to his knee on Saturday and could be out for some time as the club waits for results of medical scans. James Collins has suffered a hamstring injury with keeping out of a return to his native country on Saturday with no return date scheduled for the Ginger Pele. Angelo Ogbonna is suffering from an illness causing him to miss the trip to Swansea over the weekend but it is hoped he can recover by next weekend as the Hammers face Burnley.

Questions are being asked why the club sanctioned the sale of Jose Fonte to China for £4.8m outside of the transfer window when no replacement to a threadbare squad was possible.

West Ham suffered its tenth game of the season where we had conceded three goals or more while it was Swansea’s biggest win of the season which moved them out of the relegation zone.