Ticketmaster in line for Hammers contract 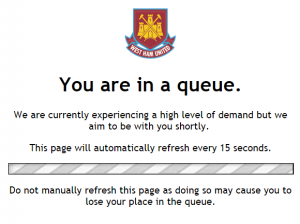 ClaretandHugh understand that West Ham will cease their partnership with SeeTickets at the end of this season.

SeeTickets is the trading name of a British ticketing services company owned by French company Vivendi SA. They have provided ticketing systems and software to West Ham at the Boleyn Ground.

West Ham are understood to have awarded to a new contract to American company, Ticketmaster who will be the Hammers new ticket partner at the Olympic Stadium.

The current West Ham ticket office website has come under heavy criticism this season as it has failed several times to cope with demand for big games which left many to call the premium line hotline in desperation running up large bills on their mobile phones.

Another recent criticism has been towards the ticket trader system with Epurse credit balances disappearing from the website and a limitation of not being able to spend Epurse credits online or to use it as a deposit for an Olympic Stadium season ticket.

A source close to club told ClaretandHugh: “Everything will be reviewed at the end of the season with regards to ticketing and that will include whether to retain the 0871 premium number for the ticket office.”

One comment on “Ticketmaster in line for Hammers contract”