Westley assesses his kids at Daggers 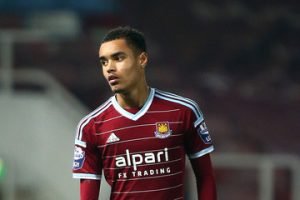 Academy director Terry Westley was at Dagenham and Redbridge last night and taking a special interest in his young protegees as they attempted to impress manager David Moyes.

Here he assesses five of the youngsters on display for ClaretandHugh:

Alfie Lewis: “I thought he had a good game. In terms of technical ability he has a lot going for him and always took the ball nicely and used it well.”

Josh Pask (right): He did really well at central defence which is a difficult position against Dagenham as they have two very lively strikers. If I was him walking into training today I would have my chest puffed out.”

Nathan Holland: He’s had a very long injury lay off and did really well in the first half but not unnaturally, tired in the second. However, he showed what he’s got.”

Nathan Barrett: This lad has had awful problems for 18 months with shin splints. That’s involved him having sugar supplements and injections so it was great to see him perform so well.

Anthony Scully: Excellent when he came on – he’s another exciting prospect for us.

← Hammers at Dagenham: How they all rated
West Ham may have found their game changer at last →
Click Here for Comments >

One comment on “Westley assesses his kids at Daggers”