Who is your Hammer of the year? 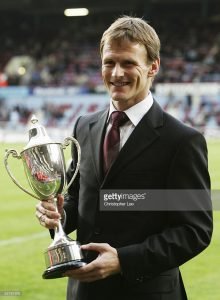 We are getting to that point of the season when the club usually asks supporters to choose their Hammer of the year The inaugural Hammer of the year award  in 1958 coincided with West Ham winning the Division Two title and clinching promotion to the top tier. For the first award the selection of the winner was chosen by the Stratford Express newspaper. From 1959 onwards the Hammer fans voted for their favourite player. Until recently the trophy was presented by the West Ham United Supporters’ Club which was retained in their clubhouse at castle street but recent years it has been part of an awards dinner Last season the Hammer of the year selected by supporters was Michail Antonio with Manuel Lanzini picking up the runner-up spot.

Tell us your Hammer of the year below in the Claret and Hugh poll:

3 comments on “Who is your Hammer of the year?”