Why Adrian is still No.1 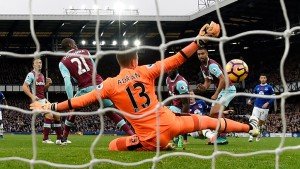 Adrian was heavily involved in the action at Goodison park touching the ball 49 times which was three more occasions than midfielder Manuel Lanzini and ten more times than right wing-back Edimilson Fernandes. Of those 49 touches, four were saves. His first save was undoubtedly the best. It came on 26 minutes when Ross Barkley collected a Bryan Oviedo cut-back before lashing a shot goalwards, only for Adrian to thrust his right hand into the air and push the ball to safety.

The No13 was back in action eight minutes before half-time, tipping over a cross-shot from Kevin Mirallas that may have been sneaking under his crossbar. In the second  half there was still time for Adrian to impress on a fourth occasion, as he parried Lukaku’s volley after another superb piece of play from the Belgian.

4 comments on “Why Adrian is still No.1”