Will Antonio get his England chance? 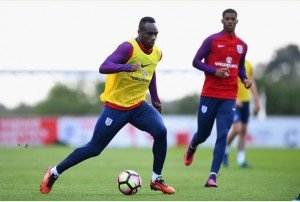 Michail Antonio was called up by Sam Allardyce for his one and only game in charge, the World Cup qualifying win over Slovakia but was disappointed after becoming an unused sub. Antonio was again in Southgate’s England squad for Saturday’s game at Wembley against Malta but again faced disappointment to find himself  on the bench and remained an unused substitute.

Will Gareth Southgate stick with his winning team tonight or take a bold decision by including the West Ham wide man in the action against Slovenia tonight?

Slovenia have only lost one of their past nine qualifying games at home (W6 D2), although that came against England in June 2015. Seven of England’s nine goals against Slovenia have come in the second half, including the last six in a row so maybe a late substitution of Antonio could be on the cards to bring England something different and one of his famous headed goals in an England shirt.

4 comments on “Will Antonio get his England chance?”