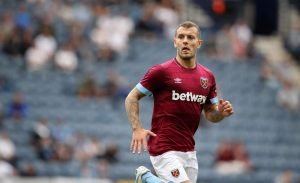 Jack Wilshere will be missing again tomorrow after being ruled out of the squad with a stomach pain.

ClaretandHugh learned this evening that the midfielder, despite training all week, has again been excluded from the squad after complaining about his stomach issue.

It means that the £100,000 a week midfielder – whose wage over three years totals just over £14 million – has seen no Premier League action since the defeat at Everton on October 19

In total he has made six appearances this season and will be unavailable to cover for Mark Noble who is included along with Michail Antonio.

Manuel Pellegrini – despite apparently appearing reluctant to reveal news of the problem when taking to reporters on Thursday – admitted: “Wilshere was working normally until yesterday when he had a small problem.

We will see tomorrow if he is able to be on the squad list. It’s a small pain that he has behind his stomach. It’s a small thing but it bothers him a little bit so he must be 100%.”

10 comments on “Wilshere gets a stomach pain sick note”